Much of the text is what you’d expect from a 1940s sociological analysis. There’s a lot of just-so generalizations which are probably good heuristics for behavior, but you can never quite tell if any particular advice is well-grounded, or just the vague sense of one random guy. For instance:

(I find it helps if you read all these quotes in an old-timey newscaster voice.)

“Realize in advance that the Chinese, friendly and spontaneous and natural as they are, have a few special likes and dislikes. They do not like to be touched. They don’t like to be slapped on the back, or even to shake hands, although some of the modern ones have learned this form of salutation. So don’t put your hands on anybody, in fun or fury or affection, until you know the person very well indeed.”

“You may want to buy something to take home to the girl friend. It is customary for the shopkeeper to ask considerably more than an article is worth. If you pay what is asked, he will not respect you for it. If you argue him down too much, he would prefer not to sell to you at all. If you pay about half to two-thirds what he asks, he will admire you and enjoy the transaction. But above all keep good humored throughout. In China it is a sign of bad breeding to grow heated over a purchase whether it is made successfully or not.”

Having spent quite a bit of time in China myself, it’s also hilarious how accurate some advice still is:

“It is usually wise, in personal dealings with a Chinese helper or assistant, to give him a problem and let him handle it in his own way. However, make sure that he understands you. You will rarely hear a Chinese say “I don’t know” when you ask him a question. “Yes” is a stock answer and this can make for no little confusion if you don’t watch out. But if you explain carefully and protect his self-respect you won’t have any trouble.”

Despite the potential over-generalizations, it’s all well-intentioned. For a random American soldier who had never been to Canada, let alone Asia, he could do a lot worse than following these guidelines when starting a multi-year stint in inland China. 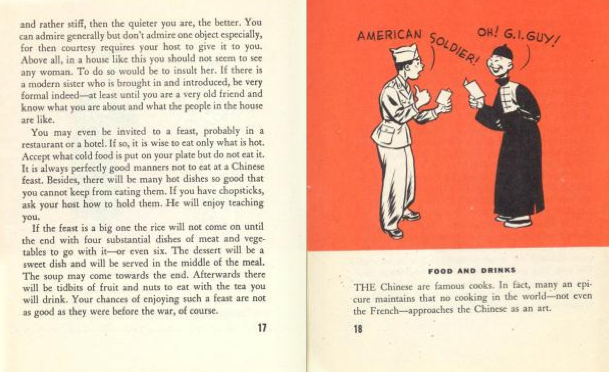 More importantly, the Guide tries to promote cooperation between Americans and their distant allies in the Orient. Thus the central paradigm of the Guide is that though Chinese people do lots of odd things, and look nothing like us, and know nothing about us… that doesn’t matter. We’re all on the same team.

“…you have to show the Chinese that Americans treat the Chinese as we treat any of our allies, and that we respect them as human beings on an equality with ourselves. Sure, there are differences. So what? There are similarities too. If you forget the differences and think of them as neighbors, as people who eat, sleep, work, and raise families as we do, you’ll be over the first hurdle.”

It’s especially emphasized that as strange as Chinese people may seem in so many different ways, they’re just like us on what really matters:

“Of all the peoples of Asia, the Chinese are most like Americans. Those who know both people often remark at their likeness. One of the reasons, perhaps, is that we both live in countries where there is plenty of space and a great variety of climate and food. We are alike, too, because we both love independence and individual freedom.”

The obvious subtext of a lot of these sections is that though the Guide itself preaches tolerance and charity toward our distant allies, the Guide authors are definitely expecting the average American soldier to be weirded out by the Chinese and automatically fall back on racism. But the Guide valiantly fights against that for moral, logical, and strategic reasons:

“If you think of the Chinese as a yellow-skinned people of a totally different race from us, you probably will never get to know them. What’s more, you’ll be playing right into the hands of Hitler and the Japs. Japan will harp on about the color question first, last, and all the time. She will tell the Chinese what she has been telling them ever since Pearl Harbor – that Americans look down on non-white peoples and that the Chinese can never hope to be treated on terms of equality by America. ‘Why fight for the white man?’ Japan dins into Chinese ears.”

“Those [Chinese] you saw in America may have come from one small part in China – the city of Canton. Judging all Chinese by those who live in one small part of the country is like judging all Americans by the residents of Hoboken, New Jersey.”

I found it pretty remarkable how wise and uplifting much of the Guide is. There are some legitimately great passages about showing charity to radically different ideas and searching for common values with a people not easily understood. It’s not what you’d expect from a sociological analysis written in the 1940s.

But… it’s still a sociological analysis written in the 1940s:

“Another likeness is that we are both humorous people. The Chinese love a joke just as well as we do, and they laugh at the same sort of thing. Their stock jokes are the same as ours – about professors, and doctors, and Irishmen – the Chinese equivalent for the Irish being people from Hunan province.”

Though it’s 64 pages long, the Pocket Guide to China is a short read (30+ minutes) and I recommend that anyone with an interest in China, the Asian front of WW2, or pre-civil rights era views on race and culture check it out. You can read the whole thing at this link.