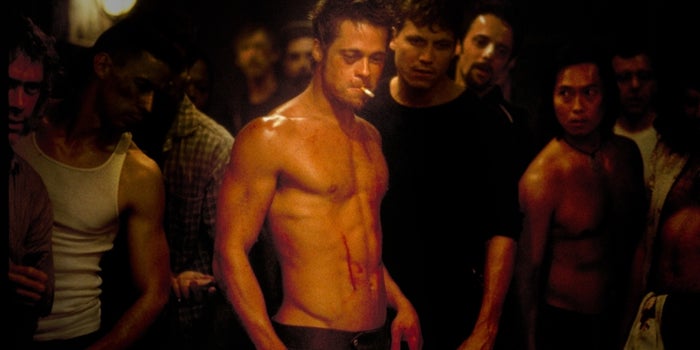 Men are suffering today because they are inherently unsuited for the social demands of modernity.

Evolutionary, men were developed to hunt, to fight, to kill, to survive only by the force of their own muscles and instinct. They were the providers for their families, tribes, and societies, and thrived in a state of chronic struggle/warfare against each other and nature. Naturally, their bodies and minds developed to reflect this reality, and even down to a neuro-chemical level, they derive value and meaning from such a way of life.

The modern world has completed removed this aspect of life and replaced it with soft, decadent, consumer capitalism. Not only are men not supposed to be violent, aggressive, and driven by their very real biological urges, but they are told that these aspects of themselves are barbaric, evil, and worthy of condemnation.

Consider the typical life path of a modern man. He is told to sit in boring, stifling classrooms for the sake of an education. This will improve his value in the economy. He is told to sit in boring, stifling offices for money. This will improve his status and credentials. Then he is told to find a woman and get married and stay faithful to her for the rest of her life. This will improve his status further and make him complete. Any men who can’t stick to this path – who drop out of school or do manual labor or don’t want to settle down with one woman – is condemned as a loser by society. There’s a decent chance he will end up impoverished, homeless, addicted, and/or imprisoned, and no one will care.

There is no room in this life path for the gut-level desires that men feel in their bones. There is no victory, no power, no dominance. Everything the man is supposed to do builds towards some sort of higher status, but the gains are illusory. Sure, society dangles the prospect of extraordinary success – it’s possible you could become a Hollywood actor or a billionaire or a rockstar, but you almost certainly won’t. You’ll just be one of hundreds of millions of generic middle-class dudes devoting your life to ends that you are biologically unsuited for.

At least the more recent past generations had some sort of big societal struggle to give their lives meaning – a Great Depression, a major war, etc. But the modern world is past all that. Everything is stable and comfortable. There is nothing to fight against, so people focus on “self-improvement” as their source of meaning. They read books so they have more knowledge, they eat better food so they’re healthier, and they work out at the gym so they can look better.

Modern society has no room for such games. It has only self-improvement, white collar jobs, middle-class marriages – traps that leave modern men bored, depressed, anxious, lonely, and self-hating of the real desires that lay within them.

Fight Clubs, the organizations in the book, are a form of therapy for modern men.

Fight Clubs provide an outlet for modern men to find embody their primal core. There is no hierarchy in Fight Club, no broader objective, no greater status to be attained – there is only you and one other guy wearing no shirt and no shoes who will fight each other with your bare hands until one side is unconscious or surrenders.

This therapeutically treats modern man’s neuroses in a few ways.

First, it gives man a taste of how he should live. The fights recall the hunting and combat of their ancestors. The stakes aren’t quite as high as losing one’s tribes to slavery or starvation, but the adrenaline and physical danger are perfectly real and potent.

Second, Fight Club is an act of self-destruction to counter the societal obsession with self-improvement. Participating in Fight Club makes men ugly, injured, tired, late for work, and shifts their priorities from the feminine social hierarchy treadmill to a narcotic-like rush of masculine gratification. It reorients men towards their natural state.

But Fight Club is just the start. Its evolution is Project Mayhem, which I won’t get into because it’s a bit more complicated, but it’s essentially an attempt to enforce the Fight Club philosophy on society as a whole, with the long-term goal of literally “bringing down the system” and returning the modern world to a traditional-primal value structure.

Of course, I’m not actually endorsing this philosophy. I don’t think getting into bare-knuckle fights with strangers every week is a good idea. But I do think Tyler Durden’s philosophy hits at real issues that all men feel to some degree. I think it’s possible that men feel unfulfilled without a real sense of stakes in their lives, like the sort that mortal combat would have given them in the past. I do think that a certain percentage of men will never be suited to classrooms and white-collar jobs, regardless of their benefits. And I think there is something mentally gratifying about trying to get in touch with some of the more primitive aspects of the self, within reason of course.

Note – The following is a follow-up posted on Reddit on the next day.

Chuck Palahniuk sympathizes with the struggles that birthed Tyler Durden, Fight Club, and Project Mayhem. But he sees the solutions offered by Durden as toxic and self-defeating. Ultimately, the narrator learns that the only way to solve his problems is to take responsibility for them and work on himself rather than blaming others for his problem.

When the story starts, the narrator is deeply depressed. He hates his job, he has no meaningful relationships (no romantic life, no friends that we hear of), and he suffers from insomnia. Rather than address the role that his own decision-making and moral outlook have on creating these problems (he chose his job, he doesn’t reach out to people, he doesn’t listen to his doctor), the narrator blames others. Enter Tyler Durden to channel that blame towards capitalism, consumerism, modernism, women, etc.

One detail I like in the book that isn’t in the movie is that the actual catalyst for the creation of Durden is Marla Singer. The narrator meets Marla and is attracted to her, but he doesn’t make a move on her. This is when Tyler is born, and soon enough, Tyler is fucking Marla. My reading of this sequence is that Marla could have potentially been a productive, self-improving component of the narrator’s life, but rather than take personal responsibility for his problems (in this case, loneliness), he succumbs to self-pity and chooses to let the opportunity pass. The narrator then subconsciously created Durden to rationalize why he didn’t take the opportunity to ask Marla out (she’s a woman and women suck, I can’t fix my problems because society is causing them, and my best friend is fucking her now anyway).

Then the end of the story has the narrator consciously rejecting Tyler for the sake of Marla. The narrator does this after he tells Marla that he has feelings for her and wants to be with her. He is finally taking a positive, self-affirming step to improve his life. This goes against everything Tyler stands for, so Tyler tries to stop him, but ultimately the narrator prevails. IMO, the movie’s ending does this a lot better than the books.

Maybe I’m wrong, but I don’t read Marla as being representative of feminine issues more broadly. I always saw her relevance in the story to be purely relational to the narrator/Tyler.